The Bank of Canada released its review of the financial system Thursday and warned that it was important to remain vigilant to the risk of household indebtedness.

The bank said that while the mortgage stress test and interest rate hikes have slowed household borrowing and improved credit quality, there are still high levels of indebtedness and a large portion is held by households that are highly indebted.

However, it noted that the share of Canadians falling behind with credit payments is low and steady.

“New measures have curbed borrowing, reduced speculative behaviour in housing markets and made the financial system more resilient. While the fundamentals in the housing sector remain solid overall and the sector should return to growth later this year, we continue to monitor these vulnerabilities closely,” said BoC governor Stephen Poloz.

Another risk to the system

He also said that assessment is needed of the risk from climate change.

The most important risks to Canada’s financial system remain a severe nationwide recession, a large house price correction and a sharp repricing of risk in financial markets.

But the BoC says its recent stress tests found that Canadian banks are in good shape to deal with these scenarios.

“Global uncertainty is rising, and risks to financial stability have edged up in the past year. Still, confidence in the resilience of Canada’s financial system remains high, and we are seeing improvements in some of the key vulnerabilities we’ve been worried about for many years,” said Governor Poloz

The Bank of Canada will make two interest rate cuts during 2019 according to Capital Economics.

That’s because BoC governor Stephen Poloz may have underestimated the downturn in the housing market and the wider impact to the economy, senior economist for Canada Stephen Brown told BNN Bloomberg.

He said that with condo presales in Toronto and Vancouver in 2018, developers have found it harder to secure investment in new projects. That, says Brown, is likely to have an impact on employment and consumption, making a big dent in the country’s output.

“Condo developers have to sell about 70% of the units in their condo before they start construction, in order to secure financing,” Brown said. “So the current housing starts represent homes that were actually sold, as pre-construction units, around 18 months ago.”

He noted that the figures he’s looking at are niche and not being widely considered.

On interest rates, Brown and his team are forecasting a drop this year to 1.25% from the current 1.75% which will be facilitated over two rate cuts.

Trudeau, speaking to an industry group Thursday, was asked about raising the maximum amortization of a mortgage to 30 years, from 25 years, for first-time buyers. The prime minister said he opted instead to introduce a program that sees the government take a stake in some home purchases, as well as increasing the funds a buyer can take from retirement savings.

“We’re looking at things that are not going to disrupt the market in unexpected ways,” Trudeau said at the Canadian Home Builders’ Association conference in Niagara Falls. “We’re listening to everyone about their concerns and we are going to keep watching that stress test and make sure that it is having the desired effect, but we are seeing fewer and fewer people take on those overreaching debt-loads, particularly in the higher sectors of the market.”

Canada’s housing market has been a preoccupation of policymakers for years — grappling with a surge in prices in Vancouver and Toronto, and fears that a bubble could develop. Officials have tightened mortgage eligibility rules and imposed other measures to curb runaway growth. Bank of Canada Governor Stephen Poloz said this week he’s confident the sector will return to growth.

Trudeau said his government tried to take measures that would stabilize Vancouver and Toronto but not “have an overly negative impact elsewhere around the country.”

The tougher stress test for mortgage eligibility was about “taking some of the froth out of those markets but also ensuring that people weren’t stretching themselves further than was wise, particularly given the fact that we can see interest rates rising in the future, and recognizing Canadians carry a high level of personal indebtedness that we need to respond to.”

He acknowledged the industry’s call for 30-year mortgages, but said “yes, it can lower your mortgage payments on a monthly level but actually, overall, increases the amount that you’re going to be paying out in interest over time. Which is why, when we looked at all the different measures we had, we really, really liked the shared equity program.”

Canada posted a record job gain last month, along with a decline in the jobless rate and a pick-up in wages, providing the strongest signal yet that the economy is coming out of a six-month slowdown. Other data this week portend a rebound in economic activity, including a strong bounce-back in exports and a surge in housing starts.

Statistics Canada announced this morning that employment rose by a whopping 106,500 in April, the biggest one-month gain since the start of this data series in 1976. This was dramatically above the median forecast of economists of 12,000 net new positions. The Canadian jobless rate fell a tick to 5.7%, near a four-decade low.

This report showed broadly based strength across regions, sectors and provinces. Full-time jobs jumped by 73,000, part-time positions rose as well by 33,600.

Employment increased in Ontario, Quebec, Alberta, and Prince Edward Island. It declined in New Brunswick and was little changed in the other provinces. Quebec posted an unemployment rate of 4.9%, the lowest in recorded history. Jobs in Alberta gained steam following two months of little change.

Construction punched above its weight for the first time in many months. Gains were concentrated in Ontario and British Columbia. This likely foreshadows a stronger spring season in existing home sales.
Provincial Unemployment Rates
(% 2019, In Ascending Order) 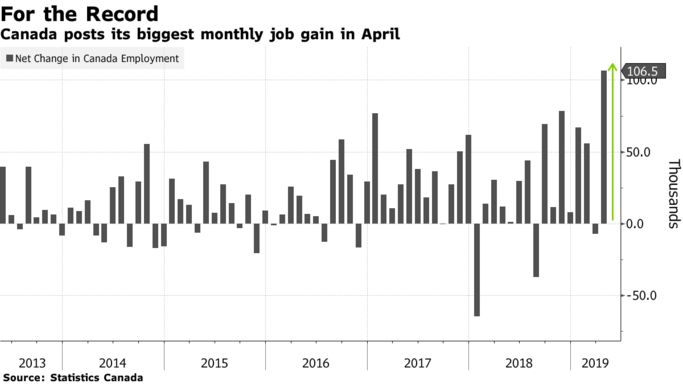 For many months the labour market strength has been the mainstay of the economy. Many had warned as recently as last month that Canada could be headed for recession amid a perfect storm of negative factors — falling oil prices, volatile financial markets, higher interest rates, cooling housing markets and global trade tensions. But many of these elements have begun to dissipate.

Exporters showed across-the-board resiliency in March after shipments tumbled in February. Toronto’s housing market, the country’s largest, is stabilizing after a recent slump. There are also signs consumers continue to spend and borrow, aided in large part by the buoyant labour market, even amid worries about the outlook.

Even wages have strengthened. Pay gains for permanent employees rose to 2.6% year-over-year, the sharpest rise since August. Total hours worked also increased, rising by 1.3% annually in April, up from 0.9% in March. Youth unemployment fell to record lows.

Bottom Line: This very positive report opens up the possibility that the Bank of Canada might take a more hawkish stance at their next meeting. It might well be that a rate hike sometime later this year is no longer off the table. One critical uncertainty, however, is the heightened trade war between the US and China. If the two sides hike tariffs sharply, a possibility given the current sabre rattling, Canada’s economy could once again be hit in the cross-fire.

Foreign Investment in Montreal’s property market surged a whopping 183% in 2018 over the previous year—the likely the result of foreign buyer taxes in Toronto and Vancouver.

“It’s not a coincidence that after the foreign investor taxes in Toronto and Vancouver, interest moved to the Montreal market,” said Altus Group’s Senior Director of Innovation and Growth Strategies Vincent Shirley. “Foreign investors originally looked at the Vancouver and Toronto markets but they also recognized Montreal as a discounted market. There are more factors involved than just that: The fundamentals in Montreal are really strong right now and the job market is very good too.”

According to Altus Group’s Montreal Flash Report 2019, year-over-year investment property sales volume in the city increased 18% last year, hitting $6.5 billion, thanks in large part to renewed interest in Montreal Island properties located downtown and on either side of Mount Royal. Sales volume on the Island of Montreal reached $785 million.

The report also noted that almost half of total new condominium sales last year were concentrated in downtown Montreal, while the rest of Montreal Island received about one-third.

“There is a lot of job creation on Montreal Island and demographics are very strong,” said Shirley. “We had a lot of structural issues for about 40 years with a very high unemployment rate, but we’ve seen it go down the last two or three years. There’s a lot of compression with the unemployment rate and now we’re at 6% or so, but it’s forecasted to go down to 5.5% next year because job creation is very strong, as are prospects for future employment.”

In fact, Montreal is becoming a leading hub for artificial intelligence and its pharmaceutical sector is also robust. Shirley noted that Montreal’s universities serve as pipelines for those industries in particular.

Even more prominent is Montreal’s port, which is, bar none, Canada’s busiest.

“Montreal’s port accepts over 75% of commodities that come through all Canadian ports,” said Shirley. “A lot of venture capital is invested in Montreal’s technology and AI industries and our pharmaceutical sector is very strong.”

Despite Montreal’s good fortunes after decades of political upheaval surrounding language and Quebec’s place within Canada, there is reason for slight consternation. The Montreal municipal government intends to implement the so-called “20-20-20 rule,” says Shirley.

“It’s going to be 20% social housing, 20% affordable housing, and 20% family housing,” he said. “The real estate industry understands affordability and inclusionary zoning is important, but we just want to make sure the push for it doesn’t disturb the economics of Montreal and development doesn’t go into the suburbs.”